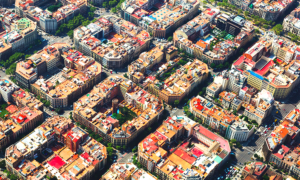 Barcelona and its county have always been exposed to natural and environmental events of various nature, with recurrent flash floods topping the list. Although erratic rainfall patterns including strong periods of heavy rainfall are quite frequent in the Mediterranean region, these potential hazards are expected to become more accentuated as a direct consequence of climate change. In this respect, some projections depict up to 10±8% and +20±12% future increase for extreme daily amounts and extreme hourly precipitation respectively. According to a study released by the Municipality as an annex to its 2018 Climate Plan, these rainfall pattern evolutions, combined with sea-level rise, might result in a stormwater system fragility across the urban fabric in more than 10 years. Such exposure is also worsened by the fact that the city has considerably increased its urban pervious surface (from 45% to 72% over the last 60 years), resulting in a reduced ability to absorb water in the ground.

Urban Heat Island (UHI) is defined as the temperature gap between an urban conglomerate and its rural surroundings – whether measured on ground surface or on the atmosphere -, resulting from a combination of solar radiation, anthropogenic activities and urban transportation. While surface temperature can vary from 10-to-15 C during the day, and 5-to-10 C during the night, atmospheric heat islands are characterised by a narrower gap. In Barcelona, there is a 3 C temperature gap on average, which can easily get to 7/8 C depending on seasons; with a higher intensity and frequency being registered at night during the winter.

A heat wave is defined as the exceptional increase in atmospheric temperatures, above the seasonal average and concentrated over a short period of time. While each country or city establishes its heat wave level based on the context, Barcelona sets this threshold at 33,1 C, over three consecutive days. Heat waves have a particularly hazardous impact on ecosystems and population – mainly children and elderly – with Barcelona being one of the most exposed cities in Spain. The city has suffered from this hazard 8 times over the past 34 years (2018).

Environmental records dating back 90 years clearly depict Barcelona as a crisis-prone city;with the most severe and recent disruptive event hitting its urban area less than a decade ago, between 2004 and 2008. During that period, four years of protractedly scarce precipitation in the Llobregat and Ter rivers’ headwaters, coupled with an increased evaporation rate due to high temperatures, culminated in the Spring 2008 water crisis: an emergency affecting over 5,5 million people in the broader Catalonia. In that context, the Regional Government had to adopt exceptional procedures to minimize water waste, while the City of Barcelona was simultaneously forced to introduce restrictive measures over water use in municipal services. Since then, several structural measures to increase guarantee of water supply have been implemented, while water consumption in the metropolitan area descended to 110 l /person a day; among the lowest in Europe and very close to the 108 l /person a day, recommended by WHS.

In the Barcelona context, forest fire exposure is mainly concentrated in the hilly peri-central areas of Collserola, Vallvidrera, Tibidabo, Horta and Torrebaro, as an outcome of both contextual and anthropogenic causes. An overlapping of dry season and high atmospheric temperatures makes the Mediterranean region – and Catalonia in particular – highly prone to wild fire risk, and climate change is expected to sharpen such conditions. On the other hand, industrialisation and urban expansion contributed to create a landscape of continuous forest land – with a high concentration of inflammable vegetation in it – in close proximity to urban areas. This results in a mutual risk for forest land and urban conglomerations, with the former being less protected from potentially igniting human activities, and the latter being further exposed to wildfires.

The centrality of Barcelona as an international tourism and commercial destination makes the city significantly exposed to international terrorism; with the latter coming to represent a major potential hazard for the city, particularly after the events of summer 2017. On 17 August 2017, the city was hit by a jihadist terrorist attack during which a track driven on pedestrians left 15 people dead and 126 injured on the Ramblas. The attack was claimed by the Islamic State of the Iraq and the Levant (IS), while successive investigations shed light on a jihadist cell in Southern Catalonia.