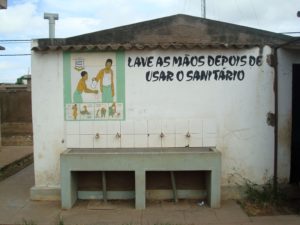 The Government of Mozambique, through the Ministry of State Administration and Public Administration, is progressively implementing a decentralization process aimed at transferring the central government’s political and financial responsibilities to municipalities (Law 2/97, supplemented by Laws 7-10/97 ), Municipal Finance (Law 11/97, to enable municipalities to invest in water and urban sanitation systems). Decentralization aims to ensure the provision of adequate public services, involving the participation of communities in the decision-making process, where accountability is one of the key factors for success.

The Municipality of Maputo has been run since November 1998 by a Municipal Council, a collegial executive body constituted by a President elected by direct vote for a term of five years and by 15 councilors appointed by him. The government is monitored by a Municipal Assembly, composed of councilmen also elected by direct vote. Prior to this date the city was run by an Executive Council appointed by the central government.

Municipality of Maputo is headed by a democratically elected President every five years. The Municipal Council of Maputo is comprised by a Mayor, a Municipal Councilor and 12 Municipal Directorates (Vereações). It also has 9 cabinets including 1 Group of Municipal Advisers. It is currently organized through the following directorates: President’s Office, Economic Activities; Education, Culture and Social Action; Finance; Infrastructure; Market and Trade Shows; Urban Planning and Environment; Human Resources; Health and Health and Information Systems.

The city administratively constitutes a municipality with an elected government and has also, since 1980, the status of province. It should not be confused with the province of Maputo that occupies the most southern part of the Mozambican territory, except the city of Maputo. The municipality has an area of ​​346.77 km2.

In the pursuit of its actions the municipality of Maputo is guided through the various plans, policies and strategies developed by both the Central Government and the Municipal Council. Some of the key policies include the Maputo City Council Five-Year Program for 2014-2018, the Urban Solid Waste Management Master Plan in Maputo City, the Urban Solid Waste Management Regulation, the Hazardous Waste Management Regulations . Among several strategies that are most relevant to the municipality in the context of Urban Resilience is the National Strategy for Adaptation and Mitigation of Climate Change (ENAMMC) for the period 2013-2025. This strategy defines as a national priority the adaptation and reduction of climate risk and groups strategic actions within the two main pillars (i) Adaptation and reduction of climate risk and (ii) Low carbon mitigation and development, in particular the development of resilience mechanisms urban areas and other settlements and promoting low-carbon development and the green economy through their integration into the sectoral and local planning process.

Municipalities have their own budgets, prepared and managed according to the principles of the State Budget. The municipalities harmonize their financial regime with the general and financial principles and assets in force for the General State budget, in order to ensure the application of national accounting standards. Revenue from Municipalities is classified by its nature, in terms of capital and depending on its origin, is either own or subconventional nature.

They are own capital revenues: