A Real-World Lab for Co-Producing Knowledge and Urban Resilience

Real-world labs provide an experimental framework to bridge theory and practice that can be applied to urban resilience research. In real-world labs researchers can intervene in urban space with the aim of gaining socially robust knowledge about urban transformation. Within my research I used the Gängeviertel in Hamburg, Germany as such a lab. The quarter was peacefully appropriated in 2009 by activists and is now developed by the City of Hamburg in cooperation with them. The article outlines the process of knowledge co-production and ends with 14 suggestions for co-producing urban resilience by developing urban spaces commonly. 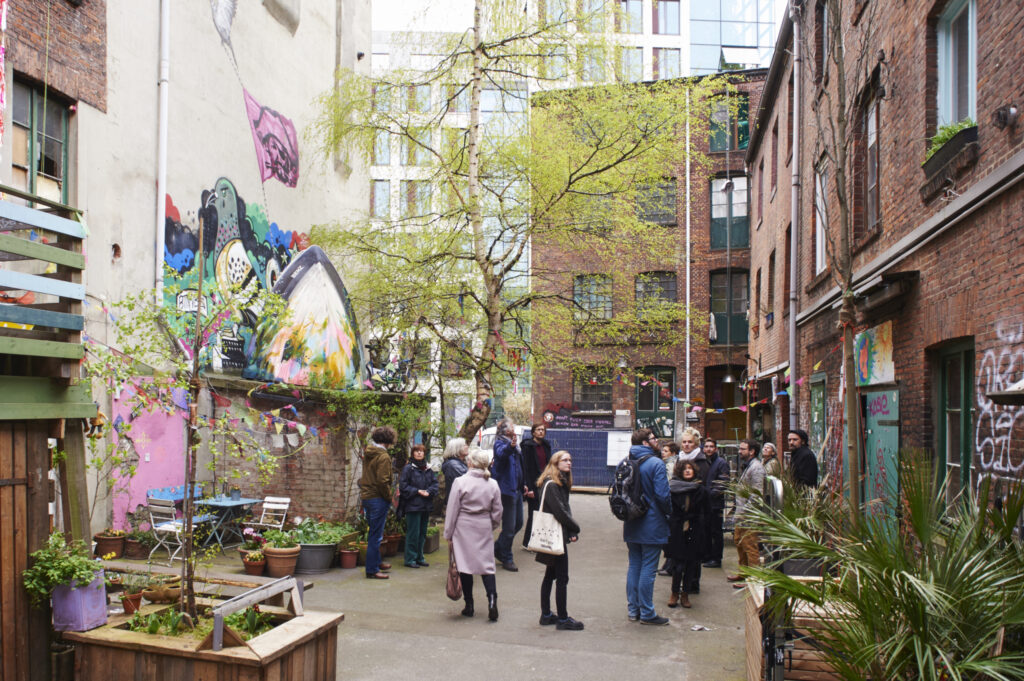 City representatives and activists on a tour at Gängeviertel. Photo: Franziska Holz

Concerning the need for more resilient and sustainable cities researchers increasingly aim to implement transformative research practices that are appropriate for both the investigation of and the push towards transformation (Folke 2016, Olsson et al. 2014). Such research „needs to be grounded in the realities of city-level actors. It must address how local governments and bureaucracies as well as civil society and people’s movements operate and interact and how space for transformative change can be created (Friend et al. 2016).“ For doing this, so-called real-world labs are getting increasingly implemented, especially in German cities. Internationally, there exist several approaches that demonstrate similarities with regards to methodology and content, such as living labs, transition experiments, urban transition labs and niche experiments. However, real-world labs offer an investigative and operative research method, in which transformation processes and its actors can be observed and influenced. With the help of this method, researchers can make calculated interventions in physical and social spaces with the aim of expediting and gaining a better understanding of transformation. By doing so, researchers take on an observant and influential function: They co-produce knowledge together with relevant actors and actively participate in the fashioning of the investigated processes. Knowledge that is gained in this way is directly related to the experiences, values, and motivations of the actors involved. It is therefore concretely applicable within transformation processes and can lead to their improvement, whereas „[t]he basic assumption is that experimenting and learning-by-doing is important not only to initiate change, but also to arrive at a better understanding of transformation processes per se (Schneidewind et al. 2016: 10).“ The co-produced knowledge can be categorized into system knowledge about the functionality of urban systems, target knowledge about desired transformations of urban systems and transformation knowledge about constraints and chances to foster these transformations. The co-production of the three knowledge types is methodologically organized with the help of four-phased transition cycles that consist of problem analysis, vision development, experiments and learning (Wuppertal Institut 2021). 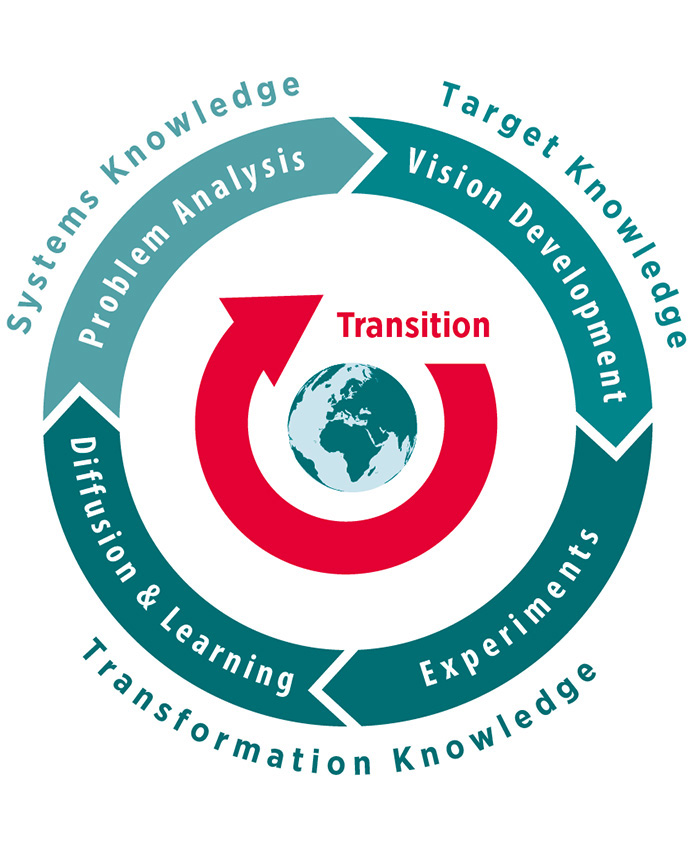 To create more resilient cities, from my point of view transformation knowledge that answers the question how different actors can work together more efficiently in the co-production of urban resilience is needed, as cooperations are often hindered by a lack of trust among them and diverging self interests. This is especially true concerning cooperations between city administrations and citizen organizations. In recent years, cities have witnessed the growth of formal and informal civil organizations that actively contribute to urban resilience and can foster sustainable transformations of urban development and planning (Frantzeskaki et al. 2016). So, to strengthen and to implement such contributions into public planning practice and policy making, new cooperation tools that support citizens and municipalities to co-produce urban resilience are needed (Petrescu et al. 2016).

Within this article urban resilience is understood as “the ability of an urban system […] to maintain or rapidly return to desired functions in the face of a disturbance, to adapt to change, and to quickly transform systems that limit current or future adaptive capacity (Meerow et al. 2016).” Following this definition, cities are understood as complex and adaptive systems, that consist of many “social–ecological–technical/ built system (SETS)” (McPhearson et al. 2016). From this perspective I used the cooperation process about the renovation of the Gängeviertel in Hamburg, Germany as a real-world lab to derive transformation knowledge that supports the actors to overcome conflicts and by doing so to support the ongoing cooperation process.

Urban Resilience Co-Production at the Gängeviertel

The Gängeviertel is an ensemble of thirteen historic buildings in the city center that were vacant mostly for approximately 10 years. After its peaceful appropriation in 2009 and an intense public debate about its future the Hamburg senate decided to develop the quarter in cooperation with the activists. The resulting concept provides funds for its renovation and calls for publicly-subsidised apartments, studios and workshops as well as a sociocultural centre. It is based on the uses in the buildings that the new users established during the appropriation. Today, the Gängeviertel is a vibrant place. Diverse activities are open to the public, while the emphasis on affordability ensures access for many. This is made possible on the one hand by the voluntary work and self-organization of the activists, as the Gängeviertel is collectively run on the basis of a grassroots democratic structure with an association and a cooperative as legal organizations. On the other hand, the city administartion supports these activities by giving use permits and waiving rents for the buildings that have not yet been renovated. After long negotiations the cooperations partners even agreed on a lease-hold contract, that ensures the self-organisation for 75 years.

I understand this cooperation as a successful spatial co-production to the benefit of urban resilience in Hamburg. I come to this finding by applying resilience principles coming from the “safe-to-fail”-concept to the cooperation process and it’s spatial outcomes; these are redundancy, diversity, connectivity, modularity, multifunctionality, (social) innovation and self-organization (Sharifi et al. 2017). Seen from this perspective, the cultural program at the Gängeviertel, for example, contribute to the modularity and diversity of the cultural system in Hamburg. This is because the self-organized cultural services are produced out of local resources and provide socio-cultural functions which are increasingly scarce commodities within the city center, in large part due to rising rents. The same can be observed for other systems, such as the city’s housing system; since the houses are managed by the activists themselves, the publicly funded flats and studios in Gängeviertel increase its diversity and also its (organizational) modularity. From this perspective the quarter can be understood as a co-produced and self-organized social and physical space that supports the adaptability of several SETS which overlap and are connected in this space. But most of all, it is a valuable experimental space to understand and learn how self-organized citizens and administrative institutions can cooperate and manage spatial developments for more resilient and sustainable cities successfully.

The Gängeviertel as a Real-World Lab

The methodic principle for experimenting and learning-by-doing within real-world labs are real-world experiments. As interventions in practical situations, they bring practitioners and academics together and serve to initiate and test possibilities for change. I initiated two of such interventions with the aim of creating space for the co-production of transformation knowledge about how to improve the conflictual cooperation as well as restoring trust and understanding between the cooperation partners. This became necessary, because the self-management of the Gängeviertel has been a critical point of conflict. For the activists, self-management is a requirement so that the Gängeviertel functions as an open and cultural place to live and work. Furthermore, they see it as the only guarantee that the buildings cannot be sold later on and that the activists cannot be displaced. Contrary to this, the city government seeks to keep control to ensure the finalization of the renovation and the long-term development of the place. Additionally, the government had to accept a shortfall in receipts, as the cooperative was not willing and not able to pay the actual market value. In 2015 this conflict nearly led to the termination of the cooperation but could be solved in 2019 with the before mentioned lease-hold agreement. Within this period of time, I first organized a workshop to find out what aspects of the cooperation had led to the conflict (Systems Knowledge), what solutions the cooperation partners want to achieve with regard to their situation (Target Knowledge) and building on that, which measures could improve the cooperation in the future (Transformation Knowledge). Based upon preliminary results I published a ʻlaboratory reportʼ that contains first suggestions for solving the conflict and improving the cooperation (Ziehl 2017). The suggestions has been discussed with fellow researchers and participants from the cooperation at a second workshop to get feedback about their usability and applicability in the further process.

One of my suggestions has been implemented in the cooperation process later on: to deal with conflicts in the future a council has been installed to coordinate the cooperation process in which all actors are represented, including high-level administration. The council shall help to negotiate conflicts and to find solutions that are feasible for the organizations involved. As a co-management instrument the council can support mutual learning, trust building and work on further adaptations to the cooperative framework. The latter can include alterations to the procedure itself as well as changes in the renovation plan. In summary, with the help of my real-world experiments and further involvement in the process I could raise awareness and approval among the cooperation partners for the importance of such a council to solve existing conflicts and avoid further ones. Besides this concrete impact in the cooperation process I derived 14 suggestions to act for co-producing urban resilience beyond the Gängeviertel case by developing urban spaces commonly (Ziehl 2020).

These are in very short: