Notes from HipHopHuis: Featuring hip hop as a force for resilience in Rotterdam

Finding narratives and images to capture the urban reality of Rotterdam has become increasingly tough for a place with such a rich and entangled history of migration. As Europe’s largest transit port, Rotterdam developed various migration patterns related to the economic activities of shipping, fishing, and shipbuilding throughout most of its history. In the 1970s, Rotterdam, like many other cities, began to shift towards a high-value, service and leisure-based economy. To turn toward this knowledge and culture oriented economy, Rotterdam was reimagined as cool and creative and in 2001 the city became the European Capital of Culture[1]. The international positioning of Rotterdam as a cultural city brought further diversification of migration patterns.

The concept of superdiversity[2] captures Rotterdam’s contemporary urban reality[3]; The history of Rotterdam is a history of migration[4], and in 2015, Rotterdam was no longer a minority-majority city but a city where diversification takes place across and within ethnic and generational boundaries. However, Rotterdam’s diversity is not about demographic categories only. It is about identities, perspectives, life experiences, lifestyles, careers and conditions.[5]  Beyond buzzwords, migration scholars pinpoint the many challenges which surface in superdiverse cities such as a clear division in more ethnically diverse parts of the city, predominantly white areas at the borders of diverse space indicating the fear of diversification, and co-presence without contact.[6] To build a resilient superdiverse city requires rethinking basic spatial and socio-cultural paradigms, which led me to study urban popular culture and the HipHopHuis in Rotterdam. [7]

HipHopHuis is home to a plethora of creatives, artists and entrepreneurs, and for many it is a gate to social inclusion and immersion in the local community. This learning community today is bridging the gap towards active participation in the local arts and cultural scene by offering internships, networking opportunities in the music industry or cultural institutions, and providing young and talented people with the space to develop their craft.  Its mission to do so comes from the belief that Rotterdam’s superdiverse youth is underrepresented in the cultural offerings of the city. Urban resilience does not only depend on technological, infrastructural and innovative developments, but also on support and engagement from various parts of the population.

Hip hop, as a self-empowered force to create but also to criticise, helps to nurture an exuberant community of young talent in Rotterdam who ultimately rethink urban superdiversity. Its leadership is not afraid to pinpoint the asymmetry of the city’s cultural institutions’ landscape:

‘There was a period when we were in the Coolhaven area and the bridge was broken. So, they were fixing the bridge for like a month, and there was a boat going up and down, and it took maybe half an hour more to get to us. You would think we would lose people because of that? No. People kept coming’ – Aruna Vermeulen, HipHopHuis’ director.[8]

In doing so, HipHopHuis opens further discussion on places of otherness that exist within the city and questions Rotterdam’s resilience. With cultural institutions predominantly located on the north side of river Maas, the south of Rotterdam has been left underrepresented despite many attempts of urban redevelopment south of Maas[9]. Consequently, this area is sometimes perceived as a city of its own. This asymmetry also frames the role of HipHopHuis in Rotterdam. 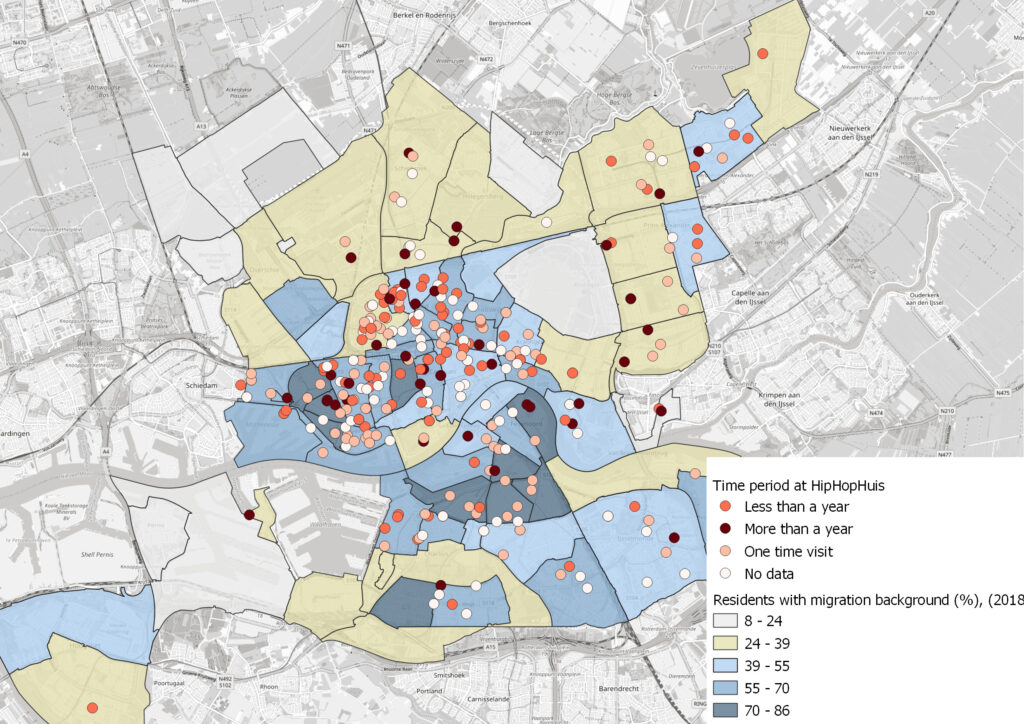 Distribution of HipHopHuis’ audience in Rotterdam, 2017-2020, own creation.

HipHopHuis is a contact space in superdiverse Rotterdam where life stories of mostly young people, intersect, interact and extend through collectively accepted forms of behavior. In hip hop culture this behavior entangles various ways of exchanging knowledge and experience, transferring skills, providing artistic guidance, sharing personal trajectories of art and style development, supporting entrepreneurial ideas and hard work to achieve them. In HipHopHuis these behaviours are coloured with the specificity of individual meanings.[10] Socially, culturally, ethnically, generationally and geographically diverse biographies come together to produce knowledge and art that are an assemblage of different experiences of living in Rotterdam.

By providing space, shape, vision, motivation and guidance to learn and create by taking pride in belonging to the city of Rotterdam, HipHopHuis fosters a resilient youth community and culture connected to local resources, histories, images and narratives fuelling their creativity. In this way HipHopHuis is creating cultural values that are resilient to global pressures and prepared to take on challenges. Moreover, and perhaps, more importantly, their resilience can teach how to develop more inclusive and socially just cities.

Fran Meissner, “Migration in Migration-Related Diversity? The Nexus between Superdiversity and Migration Studies.” Ethnic and Racial Studies 38, no. 4 (2015).

[10] Nigel Rapport, “From affect to analysis. The biography of an interaction in an English village,” in Anthropology and Autobiography, eds. Judith Okely and Helen Callaway. London, New York: Routledge, 2005.