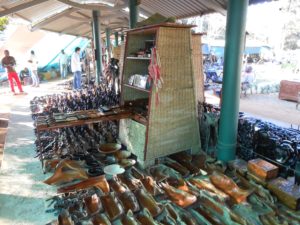 Mozambique is the 97th largest export economy in the world and the 97th most complex economy according to the Economic Complexity Index (ECI). In 2015, Mozambique exported $6.06B and imported $8.93B, resulting in a negative trade balance of $2.87B. In 2015 the GDP of Mozambique was $14.8B and its GDP per capita was $1.19k

Mozambique is the 97th largest export economy in the world and the 97th most complex economy according to the Economic Complexity Index (ECI). In 2015, Mozambique exported $6.06B and imported $8.93B, resulting in a negative trade balance of $2.87B. In 2015 the GDP of Mozambique was $14.8B and its GDP per capita was $1.19k.

In 2015 Mozambique exported $6.06B, making it the 97th largest exporter in the world. During the last five years the exports of Mozambique have increased at an annualized rate of 5.3%, from $4.35B in 2010 to $6.06B in 2015. The most recent exports are led by Raw Aluminium which represent 19.3% of the total exports of Mozambique, followed by Aluminium Bars, which account for 15%.

The annual gross domestic product per capita in Mozambique was USD349 in 2006, one of the lowest in the world; however, in the last decade, the country has shown an average annual economic growth rate of about eight per cent (UNDP 2007). The country Human Development Index has increased from 0.413 in 2002 to 0.466 in 2007 (UNDP 2007). Today, agriculture is the main economic activity of the country, and most of the workforce relies on subsistence agriculture, especially in rural areas, with considerable exposition to weather-induced risks such as floods and droughts.

There is also a considerable volunteer network. Local and international organizations have attracted many international volunteers to Mozambique. Volunteer placements occur in cities and rural areas, and across many sectors. Further information can be found in the next section on ‘Volunteering in Mozambique’.

Maputo City is the large African city with the highest potential for inclusive growth, according to the 2015 MasterCard African Cities Growth Index (ACGI). Maputo’s inclusive growth potential falls into the medium-high category, attributed to its share of Mozambique’s foreign direct investment (FDI), which as a percentage of national GDP is among the highest in the world. The city boasts constantly improving levels of government effectiveness, regulatory quality, and ease of doing business.

The city of Maputo also occupies a central position in terms of Infrastructure, Economic activity, Education and Health. The city concentrates most of the services and corporate headquarters of main economic groups and companies (public and private). Despite concentrating only 5.4% of the country’s population, Maputo is responsible for 20.2% of Mozambique’s GDP. The trade, transport and communications, and manufacturing sectors are the most significant, accounting respectively for 29.6%, 29.5% and 12.4% of national production, according to the National Human Development Report (Relatório Nacional de Desenvolvimento Humano).

Around 80% of the population continues to work in agriculture, where there is a focus on the production and export of fish, sugar, cashews, cotton and timber. Local employment in the newly emerging resource industries has been extremely limited. The manufacturing sector remains grossly under-developed, and the tourism industry has struggled to rebound following the civil war. Furthermore, steady growth has been thwarted by a series of large floods in the central region.

Approximately 54% of Maputo city’s residents live below the poverty line of $1.50 per day and 70% live in informal settlements.