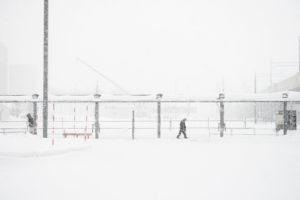 Yakutsk presents the most extreme contrast among cities in the world in terms of the annual temperature amplitude (102.8°C) and is the largest city built on continuous permafrost.

The climate on the territory of the City District “Yakutsk Gorod” is characterized as continental with severe winters (average temperature in January -38ºС) and hot summers (the average temperature in July +19ºС). Winter lasts from the beginning of October to the end of April. Due to the stable Siberian anticyclone, skies are usually clear but an extremely cold frosty fog forms over the city. In summer, the daily temperature amplitudes are very large, with daytime temperatures in July sometimes exceeding + 30°C, and at other times, exhibiting frosts. In mid-August comes autumn, and the first significant frosts can already be observed in mid-September.

The average annual temperature is -8.8°C. The duration of the heating period is 256 days with an average daily temperature of -21.2°С. For such a continental climate, precipitation is typically low – only 238 mm during the year – with more than 80% falling between May and September. The maximum precipitation is in July (39 mm). In winter, the snow cover is stable, by March it reaches a maximum average height of 33 cm. The humidity of the air for the year is 68%.

Yakutsk is located in a flat area, in the valley of the Lena River (Tuymaada valley). The river banks are sandy, covered with cane on the shallows. The left bank of the Lena breaks into the Tuymaada valley with a steep indented ledge, which is the edge of a slightly hilly plain covered with pine-larch taiga that towers over the valley at about 100 meters. Within the territory of the city, there are many lakes (Saysary, Teploe, Taloe, Solenoe etc.) and the central part is separated from the river bed of the Lena by a wide grassy plain called “The Green Meadow”, which is the flood plain of the Lena River and is flooded in high water in spring.

The City District “Yakutsk Gorod” occupies the territory not only of the Tuymaada valley, but also the vast lands to the west of it for a  total of ​​360 390.38 hectares. Except for the Tuymaada valley and Magan village, the rest of the district is barely inhabited and is mostly constituted of forests. The inhabited area is composed of 11 settlements with total land area of 25118.81 hectares (6.9%).

The remaining  land  is dedicated to industry, energy, transport, communications and other special purposes which occupies around 836.6 hectares. The total area covered by ​​the water bodies is 13928.2 hectares. Finally, specially protected territories and facilities combined covers an area of ​​259 hectares.

The city’s source of drinking water is the Lena River, where the water intake structure of the company “Vodokanal” located on the river bank in the north-eastern part of the city, has a capacity of 60 thousand m3/ day. About 80% of the population (257 thousand people) in Yakutsk are connected to a centralized water supply system. In order to solve the problem of supplying a sufficient quantity of drinking water to the city, a new water intake station is being constructed.

The coverage of the population of Yakutsk by a centralized sewage system is 73%. In 2006, a unique biological wastewater treatment plant with a capacity of 90 thousand m3/ day was built. Removal of liquid domestic waste from buildings and facilities which have a decentralized sewerage system is made by specialized transport (sewage machines) and carried to a specific station in Yakutsk, which is connected to the Biological Wastewater Treatment Plant.

The company “Yakutskenergo” owns the facilities of YaTETs, YAGRES and YAGRES-2, which combine heat and power generation, and provide heat and electricity supplies for the central districts of Yakutia. In addition to these, there are several boiler houses of state, municipal and private organizations, which mainly carry out heat supply for remote areas of the City District.

In the territory of the city of Yakutsk solid waste is collected via a container collection system. Currently, there is only one landfill for storing solid waste in the City District, located 12 kilometers away from the city. The regional operator plans to build a new landfill further away and a transfer station with sorting functions.

There are 2 airports operating in the city: “Yakutsk” – located in the northern part of the city, carrying out domestic, interregional and international flights and “Magan” – which is used mostly for domestic flights within Yakutia, and provides a spare airfield to the “Yakutsk” airport.

The river port of Yakutsk is located on the northern part of the city on the left bank of the Lena River, in one of its ducts – the City Canal, which now, after the construction of the city dam in the 60’s, has turned into a backwater for the river port’s functions. The river port, the largest in the Republic, provides transportation for local passengers and cargo, and plays a major role in transshipment of goods. It carries out loading and unloading operations, processing and storage of incoming and outgoing cargoes (including large and heavy cargoes).

There are 76 medical and preventive services, 66 organizations that carry out educational activities and programs for preschool education and childcare, and 69 general education institutions.

In the system of higher professional education and science, a key role is assigned to the Northeastern Federal University named after M.K. Amosov (NEFU) and the Siberian Branch of the Russian Academy of Sciences (SB RAS), at which the Arctic Innovation Center operates.

The city considers among its main assets a large number of buildings of national importance, including theatrical and entertainment institutions: 19 cultural-leisure facilities, 19 libraries, 9 museums, 6 professional theaters, and 1 culture and recreation park. There are also 179 sports facilities and 2 stadiums.