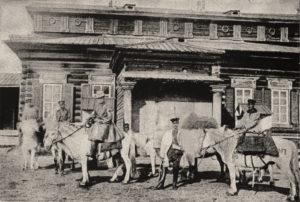 The city of Yakutsk is the capital of the Republic of Sakha (Yakutia) in the Russian Federation, located in the Tuymaada valley on the left bank of the Lena River. It is the largest city worldwide built on the permafrost.

In 1632, a detachment of the Yenisei’s centurion Petr Beketov, during the exploration the banks of the Lena River, laid the Yakutsk (Lenskiy) fortress (“ostrog”on the right bank of the river downstream from the location of modern Yakutsk. In 1638, the fortress became the center of the newly formed Yakut province. In the 1640s, due to frequent floods, the fortress was moved to the current location of Yakutsk – in the Tuymaad valley. The name of the settlement was changed to Yakutsk in 1643. In 1822, Yakutsk became an “oblast” city, and in  1851 Yakutsk became the center of the newly recognized independent region of Yakutia.

From the middle of the 17th century, the government of the Russian empire chose Yakutia as a suitable place for exile of revolutionaries as it was considered to be “a prison without bars” due to its severe climate. In Yakutsk, representatives of three generations of Russian revolutionaries, from the Decembrists to the Marxist-Leninists, were exiled, and some of their descendent still live in Yakutsk nowadays.

The economic life of Yakutsk took off from the industrial development of Yakutia in XIX-XX centuries, particularly after gold mining along Vitim River and its tributaries. At that time the city becomes the industrial center of the region and since then the city has expanded and grown significantly. The remarkable socio-economic growth of the region predetermined the status of the city – it became not only an economic, but also an administrative, political, cultural and scientific center not only of the Republic, but of the entire Far East region of Russia. A particularly active development period of Yakutsk occurred during the governorship of I. I. Kraft in 1906-1913 during which a power station, a telephone station and several museums were built, and the department of the Imperial Geographical Society was founded.

After the Civil War, the Soviet regime was established in the Yakut region in 1918. By October 1921, Platon Oyunsky made a draft of the “Declaration of the Rights and Duties of Workers of the Yakut Autonomous Soviet Socialist Republic” and “Regulations on the Autonomy of the Yakut Republic.” In 1922 the work on the creation of The Republic was completed and based on those documents the Yakut Autonomous Soviet Socialist Republic was formed on April 27, 1922, with Yakutsk as its capital. It was the first statehood in the history of the Sakha people.

In the 1930s, the first scientific research institute was created in the city. With this, The Republic reached a new level in public education and science.

During World War II, Yakutsk was part of the air route ALSIB, which was used to transport lend-lease aircrafts from the United States.

On its foundation, Yakutsk was the military-administrative and commercial center of the Lenskiy Region. Currently, all types of socio-economic activities of modern society are present in Yakutsk, such as industrial production and construction. Many types of transport have been developed, and a wide consumer market has been formed, contributing to make the city into the center of the financial and credit system of Yakutia. Yakutsk is also considered the scientific, educational and cultural center not only of the Sakha Republic, but also of the Russian Far East Federal Region.