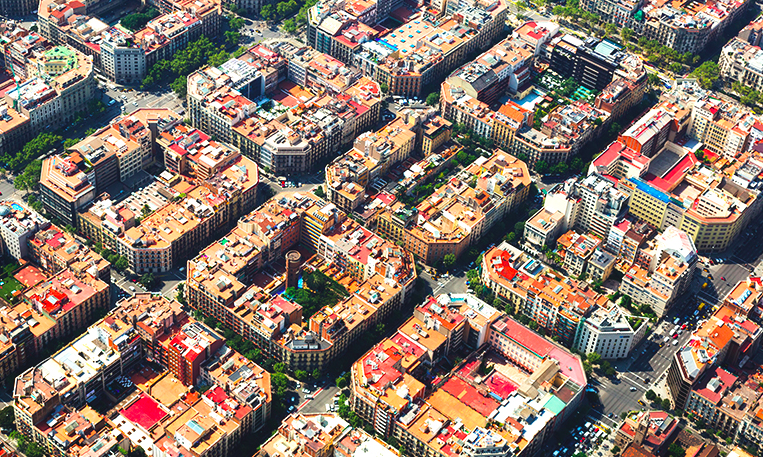 Foundation of the City

The City of Barcelona was founded as a Roman military encampment around  15 BC and was build on a previous Iberian settlement named Barcino. Although as a Roman colony the city was still eclipsed by Tarragona, it grew rapidly in wealth and size, soon expanding its influence on broader Catalonia and becoming a major trade hub in the region. Its rising political status, coupled with a strategic position on commercial routes, made Barcelona an important hub during the Visigoth, Arab and Carolingian domination, before being assimilated by the Kingdom of Aragon (early 12th century), and eventually by the Spanish monarchy (15th century), as a result of dynastic unions.

Under the former, Barcelona experienced a positive season of political and economic prosperity, establishing a successful commercial hegemony across the Mediterranean. On the contrary, the Iberian Peninsula’s unification under a Spanish kingdom, with epicenter in Madrid, opened a long period of economic decline. Externally, this season of decay was accentuated by the emergence of the Atlantic route and the coterminous waning of the Mediterranean Sea as a commercial outlet. Internally, Barcelona suffered from a series of civil wars, insurrections, succession struggles and plagues; resulting in its political marginalization for at least three centuries.

Against this backdrop, the following are some of the most salient events characterising Barcelona’s history in modern times:

The industrial revolution. From the early 18th century onwards, the emergence of the first industrial plants in the city, coupled with a growing influx of rural migrants from the surrounding territories, triggered a new stage of growth for Barcelona; whose urban population increased by almost seven times in less than a century. This was also a particularly florid period for culture, literature, arts and architecture: triggering important transformations at the city-scale, like the demolition of the ancient walls, the expansion plan designed by Ildefons Cerda, as well as several other projects of urban renewal.

The Civil war and the Franco dictatorship. Following the military rebellion of 1936, the consequent civil war (1936-39) and the establishment of Franco dictatorship, Barcelona – and Catalonia in general – suffered from almost 40 years of substantial limitations, both in the political and in the cultural sphere. In spite of this, during the 1960s’ economic growth  and consequentially demographic expansion resulted in partly unregulated urban sprawl and massive urbanization projects.  Following Franco’ death in 1975, Catalonia was recognized as an autonomous community and was given further autonomy, which  brought extensive infrastructure development in the city, culminating with the Olympic games of 1992.

The 1992 Olympic games. This featured as a turning point in the city’s urban history, opening a phase of social and economic transformations that repositioned Barcelona as global touristic destination, as well as a major hub for services and economic investments in Mediterranean Europe. In addition to large public and private investments in sport infrastructure, the Olympic games triggered substantial changes in Barcelona’s urban asset, the most impactful of which was the creation of over 2 miles of beachfront, through the requalification of former industrial areas.

The 2017 referendum and political crisis. Catalan independentism found new momentum in the early 2010s’ amid requests for greater political and fiscal autonomy from the Spanish central government. Following a referendum held on 1 October 2017 – judged illegal by the Spanish Constitutional court – the Catalan president Carles Puigdemont declared independence on 27 October 2017. The referendum resulted in 90% of Catalan voters backing independence – with an electoral turnout of 43% – and was marked by widespread episodes of police violence. In response to the independence declaration, the Spanish Prime Minister, Mariano Rajoy, imposed Article 155 of the Constitution – which allows the central government to take control of a province – calling for new Catalan elections in December 2017 and arresting ten members of the independentist government.