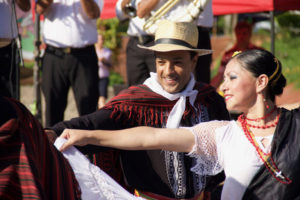 The city of Asunción was founded on 15 August 1537, by Captain Don Juan de Salazar y Espinoza, who arrived in Asunción with Don Pedro de Mendoza, first govenor of Río de la Plata. Ever since it was founded, Asunción has been the political and administrative centre of the region that would later become Paraguay, as well as the site of its major historical events. Asunción is the seat of Paraguay’s political and administrative power, and the base of its most important military units, educational institutions and services.

The city’s original name was Puerto y Casa Fuerte de Nuestra Señora Santa María de la Asunción (Port and Fortress of Our Lady Saint Mary of the Assumption). Locally it was known as Paragua”y”, the name of the main river.

When the Spaniards arrived in what is now Paraguay, the indigenous Guaraní of the eastern region settled in large guáras, clearly delineated regions. The guára where the city was founded belonged to the Cario-Guaraní region, which at the time covered an area between the Manduvirá and Tebicuari rivers.

Asunción was also called “Mother of Cities”, since it was the centre of a new province and the base for expeditions to found other cities, including Buenos Aires (founded for the second time, after the city had been abandoned previously), Corrientes, Santa Fé, Concepción del Bermejo (Argentina), Santa Cruz de la Sierra (Bolivia), Santiago de Jerez, Ciudad Real (Brazil).

Another significant event was the founding of the cabildo, the town council on 16 September 1541, the legal Act signed by Domingo de Arala at a meeting of the colonists held at the Fortress of Asunción. It was the first step towards the formation of a stable government to regulate the institutions of the period. With the creation of its council, Asunción became the first city in Río de la Plata.

The following are some of the most important events that took place in the city:

Paraguayan Independence: On 14 and 15 May 1811, Paraguay became independent from the Viceroyalty of Río de la Plata (a Spanish colonial possession). A military uprising led by Pedro Juan Caballero forced the governor, Bernardo de Velasco, to form a revolutionary junta, and a week later he was forced to resign. Sovereign independence was declared on 12 October 1813.

The War of the Triple Alliance (1864-1870): The conflict began in December 1864, between Paraguay and Brazil, then in May 1865 Uruguay and Argentina joined forces with Brazil. Paraguay and the city of Asunción were invaded during the war, it is estimated that before the war Paraguay had about 500,000 inhabitants, while by the end of the conflict only 100,000 to 150,000 remained. A large proportion of the surviving population was female. The Occupation of Asunción began in January 1869.

The Chaco War: Fought between Bolivia and Paraguay from 1932-1935, over the disputed Chaco region, at the war’s end, the region was granted to Paraguay, resolving a dispute that lasted almost 50 years. The conflict established the city of Asunción’s strategic importance, turning it into a point of contact between the eastern zone and the Paraguayan Chaco.

The 1947 Civil War: Asunción bore witness to Paraguay’s most recent civil war, which began on 7 March 1947 and ended in August of the same year. This conflict led to the emigration of much of the city’s population, primarily to Argentina.

Function of the city

The city originally functioned as a political/administrative centre and military base, while its port served as a logistical hub. While other aspects of the city’s functions remain unchanged, many of its port services moved elsewhere in the last decades of the 20th century. These were transferred to new more modern ports along the Paraguay River, and were supplemented with the opening and improvement of overland routes, and aerial transport. During the twentieth century it was also the country’s main railway hub, however the country’s rail network has since declined, and now no longer exists.

Asunción is the headquarters of major commercial and industrial companies, national and international banks, and diplomatic delegations. Asunción has become a tourist destination in recent decades and its corresponding services have increased. The military central command and administration is based in Asunción, as are the state security services.

Interview with the Mayor of Asuncion, Mario Ferreiro

More information about the Making Cities Sustainable and Resilient Action